A Benefit Performance for the Dutchess Co. Pomona Grange

A Solo Show written and performed by Joe Baer

If you enjoy history and story-telling with a satirical twist, you won’t want to miss Samuel Clemens: Tales of Mark Twain!

Celebrate Mother’s Day Weekend by taking Mom to the Theater! The Dutchess Co. Pomona Grange will present, Samuel Clemens: Tales of Mark Twain, a one-man show written and performed by Joe Baer, at the Standford Grange in Standfordville, NY.

So what does Mark Twain, writer, satirist, story-teller, have in common with this day and age? Everything! One, Ernest Hemingway once said that “all of American literature could be traced back to Mark Twain.” Two, Twain, circa 1900, boldly branded himself with his personal style of a white suit, white unruly hair and a cigar long before it was fashionable to engage in such pomposity. And three, Twain publicly skewered the powerful, mocked the pious and helped a growing nation face its flaws with vinegar and wit. Now what late-night talk show host doesn’t ascribe to that?

In his newest one-man show, Joe Baer portrays Samuel Clemens near the end of his career, to present a nostalgic look back through time; starting from his rural roots in small town, Missouri, to his International acclaim. This narrative performance highlights the pinnacles and ebbs of this iconic American figure against a historical background.

Joe Baer is long-time Rhinecliff resident, actor, (Love Letters, (2017), (Christmas Carol (2016), Clarence Darrow,(2015), Camelot (2013), Vince Dirango (2011, 2012) writer and Emmy-Award winning lighting director. He is also an active member of the Rhinebeck Grange. Says Baer,“I enjoy the challenge of working the stage alone to present significant historic figures in their finest moments. As author of Samuel Clemens: Tales of Mark Twain, I chose the format of a theatrical lecture, a style I imagine Twain would have used to present in his time.”

The show will continue at three other venues in the Hudson Valley through May.  The price of admission just $15.00.

The Pomona Grange covers all Granges in Dutchess Co. It is a family-based community organization with a civic mission. Fund-raising supports Grange efforts to offer educational programs, scholarships, and implement service projects such as planting trees, assisting food pantries, and quality social interactions.

If you enjoy history and contextual story-telling, you won’t want to miss Samuel Clemens: Tales of Mark Twain, a one-man show written and performed by Joe Baer thru May. All doors open one-half hour before the show. Reservations are encouraged as seating is limited. General seating with COVID safety guidelines adhered to. Tickets are available at the door $15.00 per person. One intermission with concessions.

For show info and to purchase tickets go to https://BaerhandsTheater.com

Members of the Rhinebeck Grange 896 will be working the Grange concession stand today.  Come on down, enjoy a bite, and meet some great people.

The weather is perfect and the food is great.  Hope to see you at the Fair.

It is that time again – our Grange meeting is Tuesday, August 14 at 6pm pot luck/ 7pm meeting. Please let us know if you are NOT coming. We have a lot to talk about to get ready for the Dutchess County Fair coming up in two weeks.  Don’t forget the Rhinebeck Grange shift will be Wednesday, August 22 from 4:00 pm – 10:00 pm at the Grange concession stand.  Come out and join us for a sandwich, a burger, or a delicious piece of pie or cake baked by one of the Grangers!!

Rhinecliff, NY.  There are few things that can be more mesmerizing than a bonfire, with gradients of oranges and yellows popping up sporadically and sparks and smoke piercing the sky. On the same token, the way in which a fire can bring people together as a community is equally rich.

Saturday, January 27 was the perfect day for Rhinebeck Grange #896 to hold its first Winter Bonfire in Rhinecliff at Firemen’s Field. The event was the idea of Grangers, Sue Sie and Richard Kopyscianski, who noticed a need for holiday tree clean up in the Hamlet and came up with a productive solution. Twenty trees from around the Rhinecliff Fire Protective District were picked up from people’s homes earlier in the day by Grangers, Joe Baer and Kopyscianski, while several more were delivered directly to the burn.

At 4pm, people began to gather as the fire was set and the first tree was tossed into the embers. Commented Granger, Evelyn Gartner, “It’s a sobering thing to see how fast a fir tree goes up in flames and crazy to think that people used to decorate their holiday trees with candles.” It is not surprising that according to the National Fire Protection Association (NFPA), U.S. fire departments responded to an estimated average of 200 home structure fires per year that began with Christmas trees in 2011-2015. These fires caused an annual average of 6 civilian deaths, 16 civilian injuries, and $14.8 million in direct property damage.

As a group of 40-50 people gathered, a batch of stone soup became heartier as guests brought freshly cut vegetables and added them to the broth. Granger, Sue Sie arrived with banjo in tow and an ad hoc band played in the background.

The Rhinecliff Volunteer Fire Company stood by in case any mishaps occurred. Said Rhinecliff’s Fire Captain, Jake Euell, “We were happy to help out at this event. We enjoy hanging out and it gave our newer members and opportunity to have a dowsing drill with live fire conditions.”

Dress warm and join us to celebrate Winter around a bonfire made from local holiday trees. Holiday trees from the Rhinecliff Protective Fire District will be picked up from 8am – 12noon from your home. Simply call Joe at 845-876-6488 to arrange for your tree pick up and set it at the end of your driveway. Trees must be cleared of decorations. Bring a veggie to add to Sandy’s Stone Soup and enjoy soup and hot cocoa on-site! Musicians welcome! Firemen’s Field is located on Valley Rd, next to the Old Schoolhouse Condos. 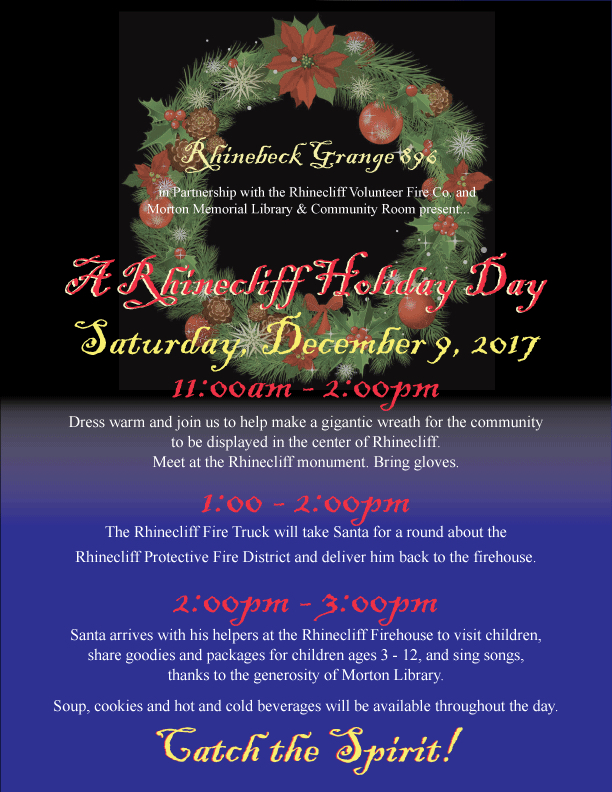 Please join us if you can Just a reminder that this Sunday is the Tree Planting at the Rhinebeck Cemetary. People will gather at the newer part of the cemetary in Rhinebeck at 10am.

Hi Everyone,
It is that time again – our Grange meeting is this Thursday, Nov 2 at 6pm pot luck/ 7pm meeting. Please let me know if you are NOT coming. We have a lot to talk about to get ready for the Wreath-making event coming up next Month on Sat, Dec 9. See you all on Thurs at the Firehouse I hope.
PS: If I don’t see you, have a wonderful Thanksgiving!
C Baer 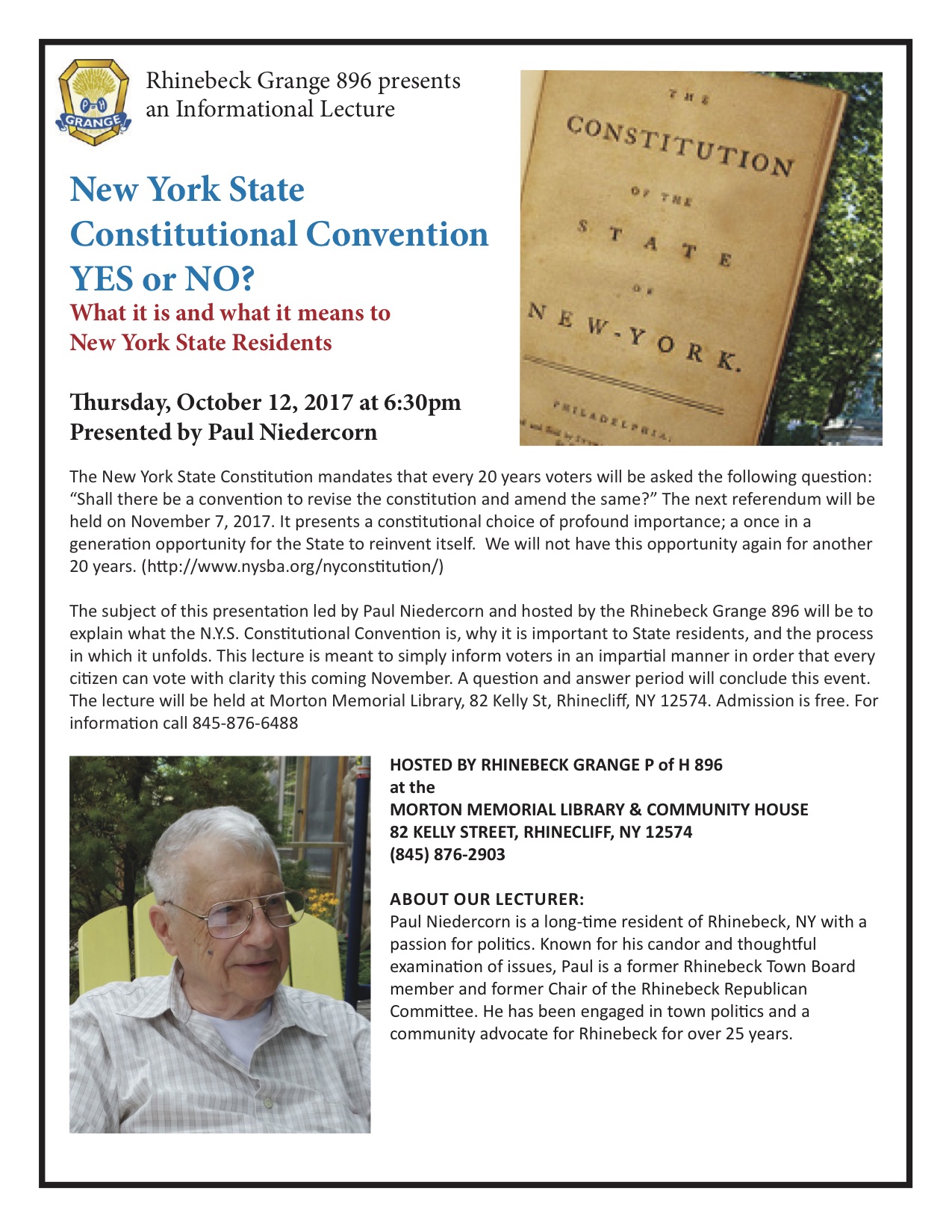 Members of the Rhinebeck Grange 896 will be working the Grange concession stand today.  Come on down, enjoy a bite, and meet some great people.